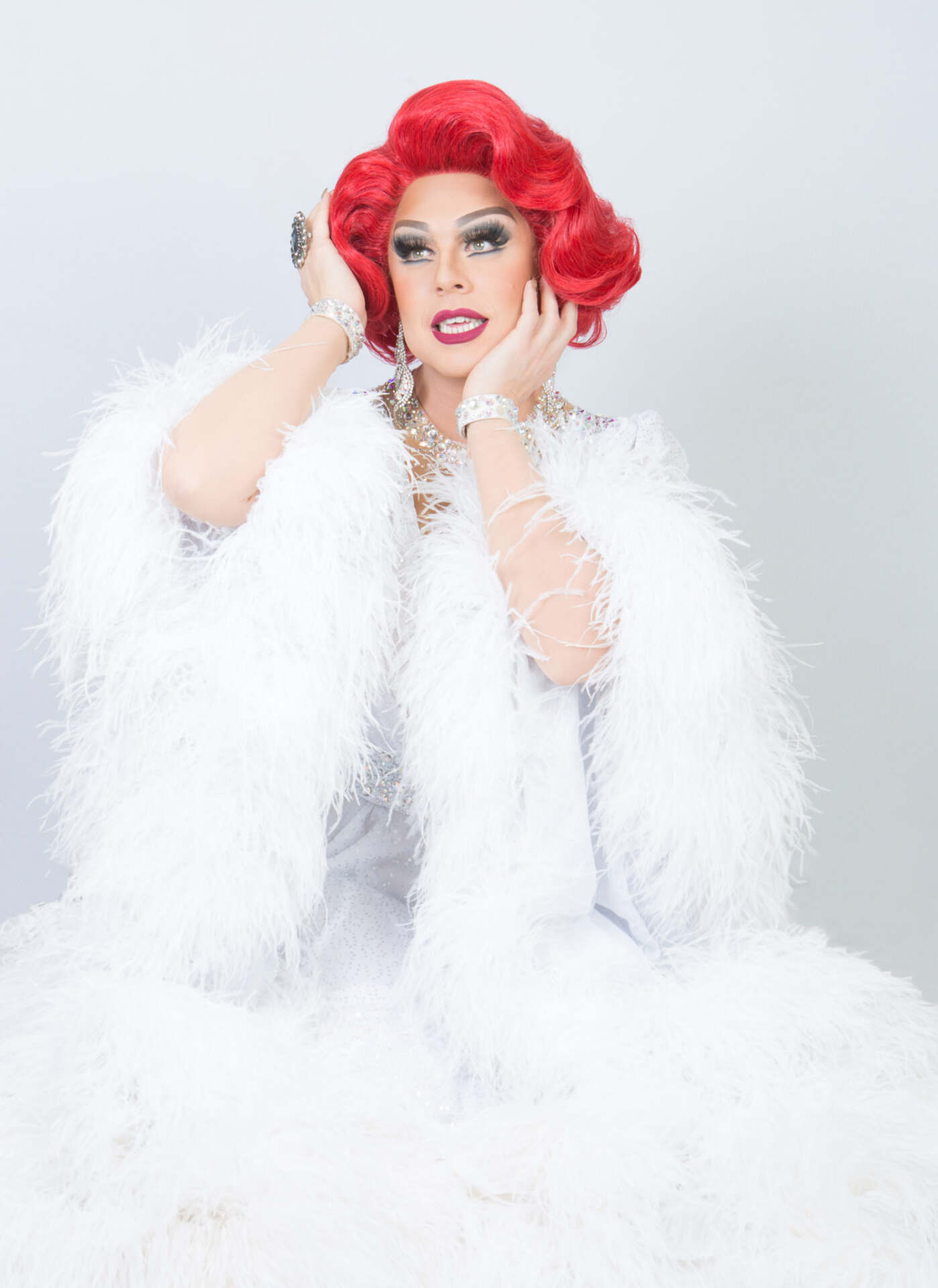 La Voix is rapidly becoming a national treasure. Having just completed a whirlwind 16-stop national tour, the feisty, flame-haired phenomenon, a regular at William and Harry’s New Year’s Eve parties and celebrity darling, has been described in The Protagonistas a performer of ‘great calibre’, with frocks, makeup and marabou, La Voix presents the grandes dames of showbiz including Dame Shirley Bassey, Judy Garland, Tina Turner and Liza Minnelli. With the merest flick of an eyebrow, or a jut of the chin, the stars of yesteryear were in the room, giving it their all. Effortless performances interspersed with a razor wit and a little bit of politics always has the crowd on its feet, whistling for more. As the Diva herself will testify, she is no ordinary drag queen.

La Voix has barely had time to dust herself off before she launches into her 2020 performance extravaganza, titled ‘The UK’s Funniest Redhead’ which kicks off on February 13th2020 at the Sherman Theatre in Cardiff, concluding on September 16th2020 at the Norwich Playhouse, taking in over 30 venues en route. We can look forward to an impressive new repertoire of songs and gags and no less than eight new couture creations!

We caught up with the quietly spoken and unassuming Chris Dennis, a.k.a. La Voix, fresh from attending the Dancing for Heroes Ball at the London Hilton and he was kind enough to give us an exclusive interview.

Are you a natural performer?

I’ve always loved performing.  As a child I had a huge dressing up box and always held fancy dress birthday parties, dressing as everything from a giraffe to Dolly Parton.

As I grew older and moved to London, I was working as an actor and auditioned for a role as a singer at the world-famous Madame JoJo’s. I got the job, but was informed it needed to be in drag and I told them I was willing, with their help, to give it a go. I could already sing I just needed the image! Some of those early days I looked terrible but like a fine wine, I improved with age – but don’t call me vintage just yet!

How did you adapt to performing in drag?

Madame JoJo’s in Soho in the late 90’s was the heart of the red light district. After dark, drug dealers, night workers, drag queens, pimps and homeless filled the street with an air of danger. Yet when you worked in that community you never felt safer. It was a time where the dark side of cabaret and drag shone through the gritty reality as a beacon of glamour and relief. It was a solid foundation to learn and develop my skills.

Your makeup is absolutely stunning, do you do yourself?

I learned the hard way from years of doing it, doing it and doing it! I actually trained with Laura Mercier, long before her name became the mega brand it is today. I trained at her house in France and we travelled all around the world together, with me demonstrating makeup application whilst Laura took questions from the audience. I was also make-up artist to Pamela Anderson, so I certainly have done my years of powder and paints.  Practice, practice, practice and coaching from one of the top makeup artists in the world probably helped!

Who is La Voix? Are you inseparable?

She is such a fun alter ego. It’s certainly a real transformation physically and psychologically. When the hair goes on, I am a different person – La Voix is a comedy character creation!

She never lets things worry her, she is the showgirl born to put on a show. As Chris, I prefer to remove myself from big social situations, spend time with select friends who know me as me, and indulge in mundane activities like gardening and reading. Peaceful, solitary relaxation gives me time for me to prepare for the next encounter with her. It never ends though, always thinking of new material, new costumes, new shows!

The La Voix character embodies a bygone age of glamour and sophistication, exemplified by Hollywood at its peak. Does she want to bring a touch of class back into showbiz?

Nowadays there is little emphasis on pure glamour and old-fashioned escapism, the trend is very much towards the opposite end of the spectrum! Realism has its place, but I adore the era of the 1950’s where post war entertainment focused on positivity, feathers, glitz and glamour, offering a few hours of glorious escapism. The audience left forgetting their troubles, in awe of the performers and desperate to own their dresses…and that was just the men!

I truly want to bring back this idea that entertainment is something magical, and the aim is surely, to entertain! I don’t know about you but “celebs do grouting” is not my idea of blissful escapism. It’s hard to describe what occurs in my shows but it’s an experience! You will leave feeling uplifted, exhausted and relieved, all in one. It’s entertainment mixed up with modern therapy.  Anything political is out and most of all, phones are turned off!

Although we are not in a post war scenario, we are still bombarded daily by the mass media. In a world where we can’t escape news about Trump, Brexit and climate change indefinitely, we can still seek a few hours’ respite at the theatre. Surely, we all need that escapism to forget about our troubles and hopefully, if La Voix does her job properly everyone in the audience will hear the most beautiful sound in the world… the sound of laughter and happiness – life is what YOU make it darlings!

What are you most looking forward to for your 2019 tour?

You can expect to see me give my all, more than ever. It’s all new! New songs, stories, confessions and costumes.

I endeavour to make my audiences experience true variety, recreate vaudeville style cabaret, immerse them in quality entertainment and a blast of live music. There is no one doing what I’m doing… who hasn’t been sectioned.

I haven’t stopped. From the moment the curtain fell on the last panto show on New Year’s Eve, I hot footed it to Heathrow to start my 2019 residency at the glamorous Limelight Club onboard P&O Britannia.

Alongside that, I am regularly joining my full band for my current “Live, Loud And Fabulous” theatre tour. Add to that new dress designs, endless visits to the hairdressers for blowouts and my new passion for yoga….if I’m not downward dogging…I’m upright in a fitting!

How do you prepare for a stage performance? Do you have any classic showbiz superstitions?

I always listen to one of my inspirational divas whilst getting ready. Be it Liza, Judy, Cher or Shirley. I find it just gets me in the mood.

I have many rituals…which does include a cheeky vodka cranberry. My motto is if the audience are at the bar, I should join them in spirit backstage with a little tipple. I like to wait in the wings hearing the audience rather than sitting stuck in a dressing room. It’s all about soaking up the atmosphere.

It was Barbra Streisand at Madison Square Gardens and it blew my mind….it wasn’t in person it was on a VHS up North in Stockton-on-Tees but she had a profound impact on me.

My first single was ‘Eternal Flame’ by The Bangles and my first album was Kylie’s first ever album! I was in the Kylie fan club! Well maybe I still am- I never called her to cancel.

Which song is your favourite to sing live?

It has to be anything Liza. ‘New York, New York’ was my first BGT audition song and it still holds a great place in my heart. Her arrangement is so amazing.

What’s in the repertoire for this year’s tour?

There are many surprises in the new show. And you can expect some of the most phenomenal costumes!

If you hadn’t been the UK’s most glamorous performer what would you be doing?

Hunting down whoever robbed me of that title!

Is there anyone in particular you’d like to work with?

The Dame Shirley Bassey! It would be a dream!

Finally, what’s the most valuable lesson you have learned from the industry so far?

Chase your dreams and be nice to everyone! Give an audience your all and they will give you it back in buckets! Also, feathers cost a fortune and Swarovski’s are better than men!

La Voix can be seen throughout the 2020 tour Britain’s Funniest Redhead. For more information visit www.lavoix.co.uk

Recent news
News categories
© Copyright James W Phillips, JWP Group 2021 | Privacy Policy
Site designed and developed by alexscheele.co.uk
Search
We use cookies to ensure that we give you the best experience on our website. If you continue to use this site we will assume that you are happy with it.AcceptRead more