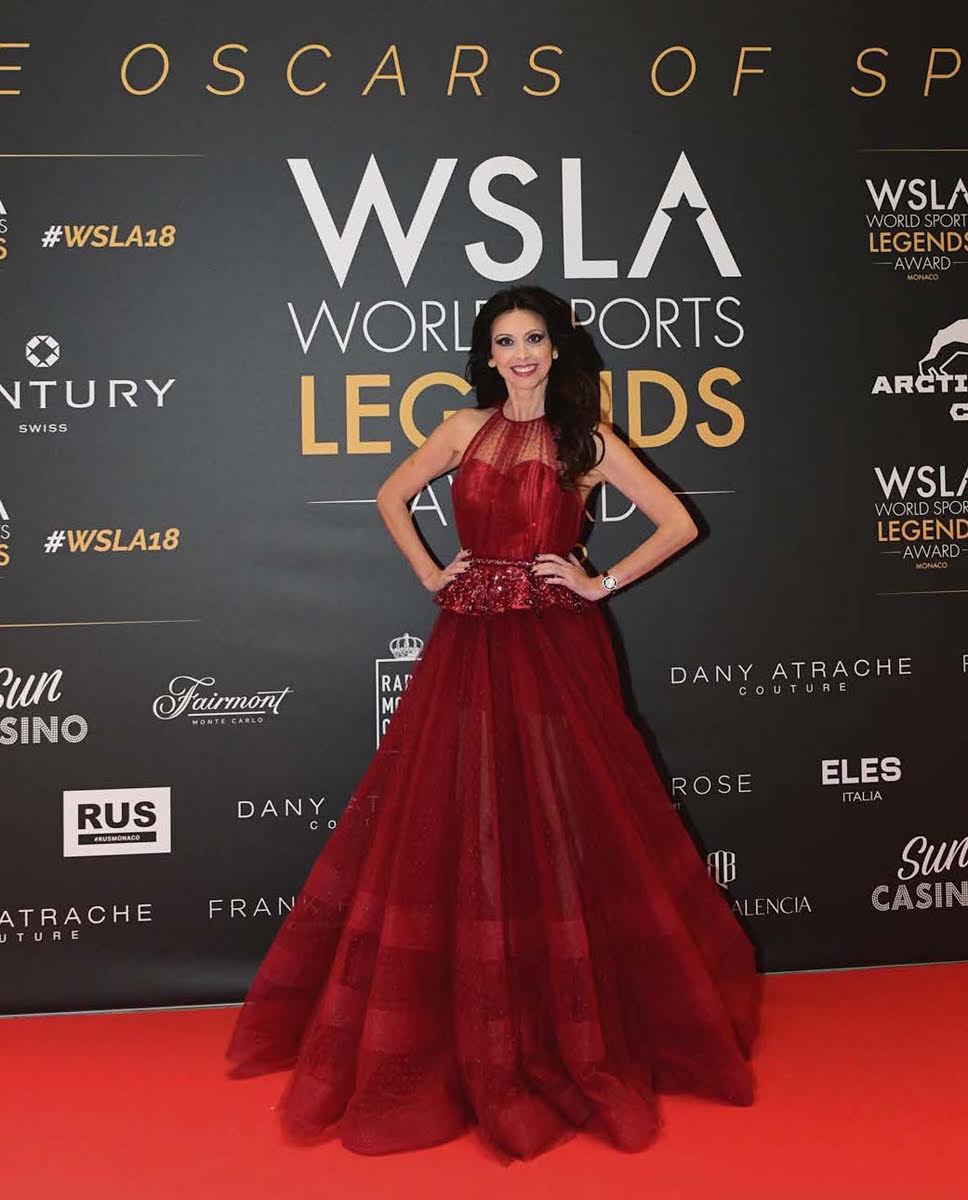 The Oscars of Sport

The great international 2-day event, the Monaco World Sports Legends Award, has taken place in Monte Carlo. It is for sport and its finest champions what the Oscars of Los Angeles are for the cinema and its actors.

The Media Daywas held on the Day1 while on Day2 the 3rdAward Ceremony and Gala Dinner-Show with Red Carpet was held in the Salle D’Or of the Fairmont Monte Carlo, situated in the famous bend of the Formula 1 Grand Prix.

It was an unforgettable and superbly elegant evening, bringing together sporting stars with entertainment, art, fashion and glamour to make the WSLAa unique international showcase and an exclusive VIP Red Carpet: the Oscars of Sport.

The event was presented by the international ballet star LorenaBaricalla, Ambassadress and Master of Ceremonies of the Monaco World Sports Legends Award.

Prima ballerina, singer and actress, she is a multi-talented artist.

Lorena Baricalla, can you tell us about some of the event highlights? Who received an award at this 3rdedition of the event?

“Again this year, the list of those who received the World Sport Legends Awardpresented the greatest world sporting champions: Osvaldo Ardiles fromArgentina, Football World Champion,Jutta Kleinschmidtfrom Germany, the only woman to have won the Paris Dakar,and Freddie Spencer from the United States, 3 times World MotoGP Champion.

The Award was received by his niece, Bianca Senna, President of the “InstitutoAyrton Senna”,who came expressly from Brazil.

Finally, theWSLA Best Values for Community Support recognized Doctor Claudio Costa, the Italian doctor and creator of the Mobile Clinic in MotoGp, which has saved the lives of many champions.

There were some really emotional moments during the Awards ceremony, prompting warm applause from the audience.

What are the main features of this Award?

“The prestigious prize World Sports Legends recognises sporting champions, men and women, both active and retired, who have gained distinction not only for their sporting exploits but also for their example, which is an inspiration for the new generations. The prize WSLA Best Sports Valuesawards an athlete who stands out for an exemplary sporting gesture which embodies sport’s ethical and moral values, or to well-known people for their community support through sport. The “Posthumous Awards” is conferred on great champions with legendary careers or to well-known people who operated in the sporting sector.

The Monaco World Sports Legends Award aims at promoting sport’s ethical and moral values as ideals to motivate others, especially the young, to excel.

The Awarded enter the Pantheon of the World Sports Legendsthrough theirhandprints”.

The event took place in partnership with the Hotel Fairmont Monte Carlo.

It also benefited from the support of the Automobile Club of Monacoand the Monte Carlo Board of Tourism and Congresses, as well as the partnership with theSun Casino.

For the third consecutive year,Radio Monte Carlo of the Mediaset Group was theOfficial Radio of the WSLA.

Officials partners of the event were the Swiss brand of luxury watches Century Time Gems andArctic World Club with its PresidentSergey Egorov, an international organization that has active development of the Arctic region as its goal. Since its establishment, the Club’s activities have been closely linked to business, science, culture, sports and charity events in Russia and abroad.

Another partner was theFrank Rose company, which operates in the lifestyle and art sector.

Various stagesthroughout the two-day event highlight fashion and glamour. What did you wear for the Award Ceremony?

“As Master of Ceremonies, for the Award Ceremony and Red Carpet I wore four marvellous haute couture long evening dresses in precious fabrics from the 2018 and 2019 collections by the renowned Franco-Lebanese fashion designer Dany Atrache: collections that are showcased at the Paris Haute Couture Fashion Week. As well, for the Press Conference on Media Day and for the Awarded Dinner I wore a short evening dress from Maison Dany Atrache”.

And what did you wear for the Talk Show on the first day of the event?

“Instead, for the WSLA Talk Show on the first day – Media Day – which I host as Ambassadress, I chose a series ofcouture dresses Handmade in Italyfrom the new 2018 and 2019 collections by Raquel Balencia, Spanish fashion designer Milano based.

I matched each dress of the two days with precious watches by the exclusive Swiss brand Century Time Gems.

Finally, the brand Eles Italiadressed some of the guests on the red carpet andcreated the outfits for the hostesses on stage.”

TheWorld Sport Legends Award’s Red Carpet is among Monte Carlo’s most prestigious and has become the place to be. Consequently, the event was attended by a fine array of world sporting champions, international stars and VIPs. Who were the guests this year?

The Red carpet was over 50 metres long, and it was decorated with a number of works of art, wasn’t it?

The “Pantheon of the World Sports Legends”was also exhibited, reuniting the handprints which were realized in previous years with the awarded champions.

Did the Gala, conceived as an American-style show, include entertainment?

“Certainly. We had performances by the corps de ballet, the orchestra, and the guitaristMassimo Borelli.

As well, the voice-off who introduced the evening and me as Master of Ceremonies was Nick the Nightflyfrom Radio Monte Carlo.”

We’ve heard that you also treated the audience to a touching performance.

“It was really moving for me to perform to this wonderful audience of champions and other extraordinary people, with the song ‘I dreamed a dream’. It’s a very intense piece which I sing in my personal version which is very close to my heart.”

Great care was also taken with the Art of Gastronomy, with an especially created menu …

“Yes, the show wasn’t just limited to the stage, but continued in the plates of the dinners. The Fairmont’s Head Chef, Didier Aniès, “Meilleur Ouvrier de France”, created real delicacies! In accordance with the partnership with the Prince Albert II of Monaco Foundation, the event undertakes to highlight the use of local and seasonal products and to follow the Mr Goodfishprogramme for the sustainable consumption of seafood.

Can you take us through the entire programme for this 3rdedition of the Monaco World Sports Legends Award?

“The Programme for the first day, the Media Day, took place inthe venues at the Fairmont Monte Carlo,and includedtheTalk Show “Sporting Stars: The Man or the Woman behind the Champion” and “Show, Art and Fashion”, which I host as Ambassadress, in which I converse with the participants at this edition. All the episodes can be watched on the World Sports Legends Award web channels on YouTube,Daily Motion and Vimeo. Then there’s the Handprints Show, during which the award-winners’ handprints are created with the artist Marcos Marin – this is a moment where the champions show great creativity in expressing their individual personalities. Lastly, theArt Show, put on by the Swiss watch brand,Century Time Gems, the event’sOfficial Partner. During the show the award-winners were able to experience sapphire cutting. The precious stones were then offered to each of them on stage.

In late afternoon, the Official Press Conference was held in the Salon des Princes at the prestigious Automobile Club de Monaco, followed by a cocktail. The day concluded with the Awarded Dinnerin the Automobile Club de Monaco’sexclusive and private “Cellier” (the Cellar) – a privileged place that can only be accessed by VIPs at an international level.

The second day featured theAwards Ceremonywith a Gala Dinner-Show in the Salle D’Or at the Fairmont Monte Carlo. The Gala was preceded by the Red Carpet with Cocktailin the Crystal Gallery. Our prestigious evening ended with the After Ceremony Red Carpetand the WSLA Partyat the Sun Casino.

The spirit of the entire event was that of a big family – an elegant and refined atmosphere offset by warm human relationships and great simplicity.”

The WSLA is an event that is enjoying ever increasing success and is followed throughout the whole year, especially on social media

“The WSLA has fans all over the world. Only two years since its inception, on its 16 social networks and web channels, the photos and videos attract round4,200,000 views per year. People have embraced and really appreciated the message conveyed by the WSLA. We must re-instate ethical and moral values at the centre of our society.”

In addition, we know that you have many, many fans on your personal social network as a performer …

“Yes, every day, I receive incredible support from Friends & Fans all over the world, with daily messages of such affection and respect that I’m truly moved. All these people follow all my adventures with great attention, and I feel the responsibility of being a good example to them all.  To date I have around 1,500,000 views a year.

Over the two platforms, this adds up to almost 6,000,000 views. We are truly grateful and delighted with this interest!”