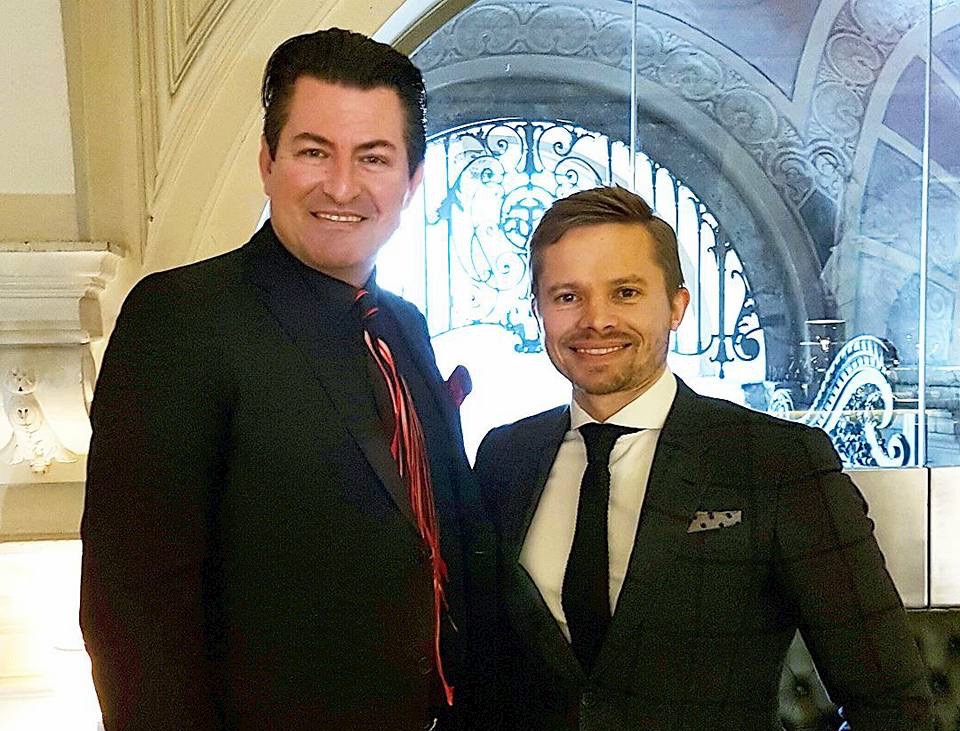 As I walked into the grand setting of the Royal Exchange London, it struck me if you removed the café it would look very similar to a ball room, which in fact was very apt as I was about to meet the internationally renowned ballroom star, Gary Edwards for Luxury News Online.

Gary had jetted in hot from the USA where he currently appears on US Dancing with the Stars, into a media frenzy around the replacement for Strictly Come Dancing judge, Len Goodman, and speculation was rife that very morning in the national press around whether Gary would take over from Len, and I was about to have an exclusive interview with the very man himself.

‘You won’t miss Gary, he is very tall!’ This indeed proved right, Gary, 50, was immediately recognisable, with a warm handshake and a beaming smile, the champion dancer greeted me and we made our way to the Royal Exchange café for an interview. As we settled down, it soon became clear that Gary was a very easy going guy, we are both from Essex in the UK and have the same cheeky manner so we got along from the word go. Gary lives in Miami with his family.

I wanted to know what Gary thought about the media storm, what he felt about Strictly, about Len, the other Judges, and the show in general. I was eager to learn about his rise to fame, teaching Michael Jackson how to cha cha cha, and what he would do if Strictly didn’t work out….

JP: How will you deal with attention from the UK press and the millions of new fans and followers?

GE: As I stepped off the plane I was in shock as I had been informed I was already featured in 40 UK publications and I realised then the press attention would of course be a worry, but I am already in the public eye in the States, I just want to be a good judge which is my passion. I am a firm believer in social media to get my views across, Twitter especially I love! I firmly believe if you have something negative to say – don’t say it! I want to be judged on my experience, my skill and judging.

JP: What can you bring to this already very popular show?

GE: I want to bring more of the judges perspective, I have a great idea of introducing a desk cam from the judging table, and also a head cam, so the viewers at home can see exactly what I am looking at to mark the contestants, and I think the public will really like this!

JP: What do you think the BBC will decide to do?

GE: Strictly is really the only thing left I want to do. It all depends on which route they want to go down, they need another straight man to balance it out, they also need to be fair on the viewers in that they need another judge with the experience and gravitas to make the decisions accurately.

JP: What do you feel about the marking on Strictly?

GE: I feel there are too many 10’s given, if you give too many top marks then it all becomes the same and a little flat. Dancers are at their best when they are challenged and they have to rise to that challenge. Top marks should be given sparingly.

JP: What was it like to meet Michael Jackson and spend 121 time with him?

GE: I was employed as the resident dance teacher by the Sultan of Brunei who’s many famous friends came to visit and learn how to dance ballroom, I danced alongside superstars like Janet Jackson, Barry White, Whitney Houston and MC Hammer and a standout meeting with Michael Jackson. I had been shown into the room at the Sheraton Hotel. I was on my own, then the double doors opened, and Michael entered, his bodyguard staying outside and there he was! He was, unbelievably, in admiration of me, which was such a hard thing to comprehend from such an accomplished dancer. He was very humble. He asked me a lot of questions and I taught him ballroom and Latin. The highest standard is a Gold routine, it can take months if not years to reach this – Michael perfected it in 20 minutes. He wanted to experiment with the steps and routines and asked if we could ‘funk it up!’ So I used Billy Jean as the soundtrack as I had been familiar with this track having used this to teach the Brunei Royal family’s younger members as they could relate to it. It really was a privilege to be in the presence of such a legend who was more interested in learning all about me and my background and the dancing. I still keep in touch with the royal family to this day.

JP: So how did you get into dancing in the first place and get to know Len Goodman?

GE: In my school days, being interested in dancing was quite often challenging, with many class mates not understanding that I would rather practice dancing than play football and I faced a lot of criticism for it. My saviour was Len. He taught at a local dance studio, and he soon became my inspiration and mentor and I realised then this is what I wanted to do as a career. The dance classes were brilliant, it was just me and 30 girls and they were all desperate for a male partner! I was in heaven! As a result I developed a huge bond with Len. He is a traditional dancer and tells it how it is just like me.

JP: What will you do if you don’t get chosen as a Strictly judge:

GE: Co-judge, Bruno Tonioli strongly supports me as replacement, however I would return to Miami and continue my career with Dancing with the Stars. It’s all positive! I have helped a lot of people in my career and I am very proud of that. I love England, the seasonal weather and Essex and I will always continue to visit regularly and have property there.

JP: What made you move to the USA?

GE: The US has become what the UK dance scene used to be. The UK has lost the fact that dancing is a lifestyle and the Americans embrace it. I judge on the ‘pro-am’ circuit which pairs professionals and amateurs together, I love to judge several couples all at once on the dance floor and have judged literally thousands of couples in Vegas on the pro-am circuit.

As my time with Gary quickly passed I came away wishing Gary all the luck in the world and also feeling privileged to have spent an hour with such a talented and well known professional dancer.

Dancer Anton Du Beke, 50, is thought to be the hot favourite to replace Len, 72, who is taking a bow at the end of the current series, but show insiders say producers may head in a different direction. Also still in the frame are former judge Arlene Phillips, Craig Revel Horwood and Helen Richey, an experienced judge with Australia’s Dancing With The Stars. But behind the scenes friend Bruno Tonioli is thought to be pushing Gary’s name forward as a possible contender for the Head Judge hot seat in the UK.

At six foot four inches he has been nicknamed “the ballroom giant” and is one of the world’s most experienced judges. Gary Robert Edwards is a World Class Judge/Adjudicator in Ballroom and Latin American styles, a qualified World Class Judge in American styles, and a qualified World Class Judge for Salsa, Freestyle and Rock and Roll. A dancer since the age of 7, he has performed all over the world, earning more than 30 international titles, including British Open Ballroom, British Open Latin and UK Open 10 Dance. In addition, he has taken top honors at the Innsbruck Gold Cup, the Bulgarian Open, the Russian Open, and the Hong Kong 10 Dance, among others. After being ranked #1 in the World 10 Dance, he received a coveted appointment to the Royal Family of Brunei. Prince Jefri wanted to be able to dance with Princess Diana when she visited.

He was being lined up as Len’s replacement on American TV but that ended when the veteran decided to carry on with Dancing With The Stars.

In his 30-year career as a dancer, coach and adjudicator, Gary has reached the pinnacle of success and exceeded even his own dreams. He has trained world champions, organized major dance events, served as music and dance advisor for top-tier international competitions and co-hosted celebrity dance-offs. He has judged more than a dozen world championships and scores of prestigious national and regional competitions.

While he continues to adjudicate top-level national and international competitions, Gary has chosen to dedicate more of his focus on television and film. Currently he serves on the advisory panel of the upcoming pro-am reality TV show, Ballroom Blitz, created by Simon Fuller and Linda Pope.

An accomplished amateur polo player, Gary was privileged to learn from Argentine players who are among the best in the world. He has coached several world-class professional polo players, and he himself earned a 2 handicap rating as a member of the Brunei Bandits polo team while on commission to the Royal Family.

A big thank you to Melanie Faldo and of course Gary Edwards!