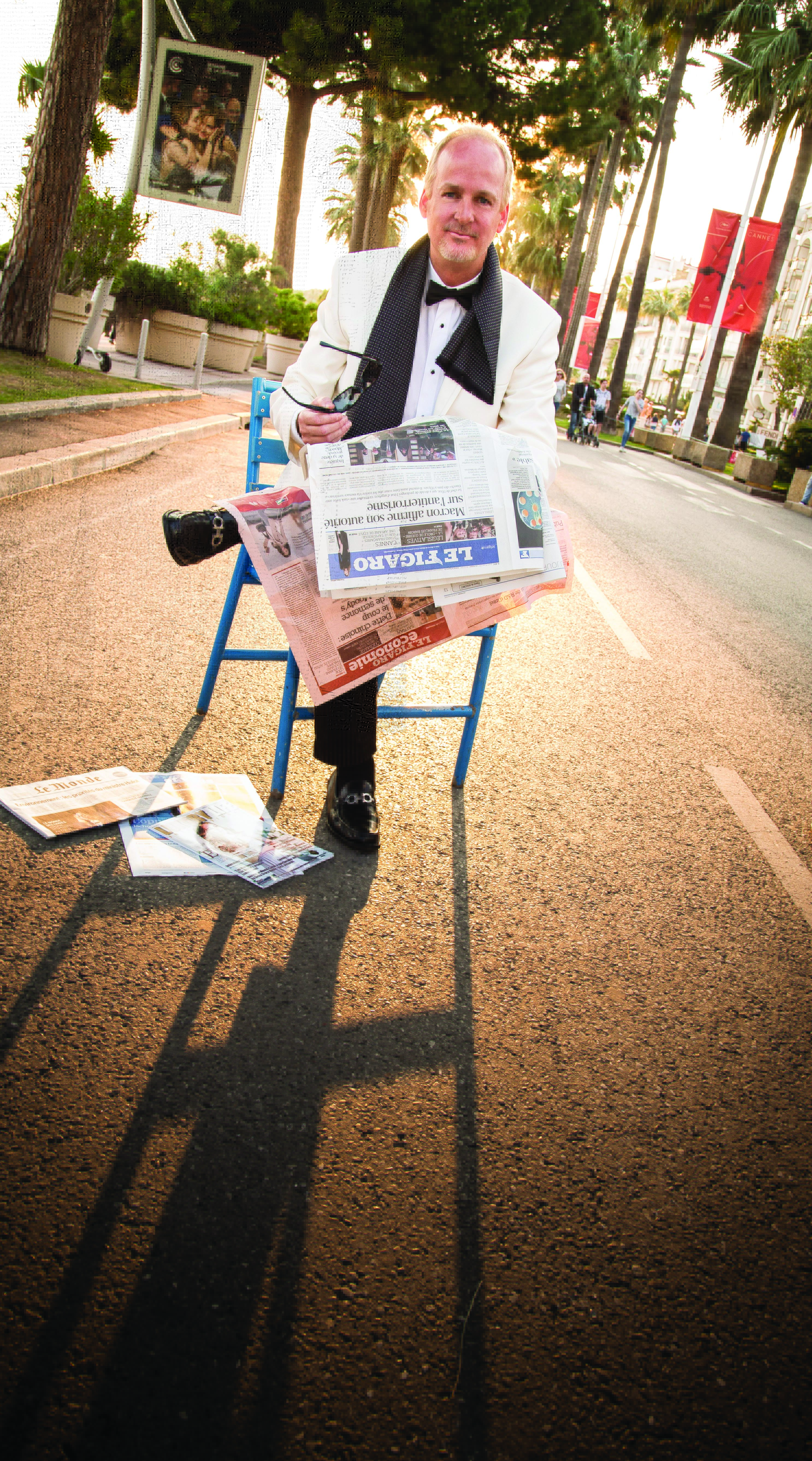 In the beating heat at the Cannes film festival we meet Larry Cech, US actor and producer

Through the crowds of the Croissette appeared Larry, a tall energetic, and charismatic gent with an air of effortless charm. We had spoken over the phone a few weeks before. Larry had produced a new film ‘Absinthe’ screening at the Cannes film festival, and he asked if I would help promote it for him in Luxury Life International. Sure! I replied, I ‘Cannes’ do! Let’s produce a feature and a photo shoot!’ The rest they say, is history.

Larry Cech is an American born actor and producer who grew up on the outskirts of Philadelphia. He is best known for his portrayal of Jodi, the surfer, from the short film Washington Blvd. which screened at the Marche du Film at the 67th Festival de Cannes. He can also be seen in the new thriller 90 Minutes of the Fever starring Glenn Plummer. Larry has studied with the famed Stella Adler Studio and has performed at the People’s Improv Theater in New York City.

Taking a break at the Intercontinental Carlton Cannes

Absinthe is the story of Simon, a spiritually lost man, who struggles to live in the past or move forward with his dream of re-igniting his long buried artistic passions. This imaginative piece is shot in colour and black and white and is influenced by the work of the famed 1930’s French photographer Brassaï, who was known as ‘The Eye of Paris’.

An avant-garde film starring two of France’s most beloved actresses, Absinthe features Oscar nominee Marie-Christine Barrault and Cesar-nominee Brigitte Fossey in the story of an American businessman who searches for meaning in his lonely existence. After he arrives in Paris, Simon receives a mysterious message from a cast of characters that include James Brown, Janis Joplin, Frida Khalo and Marilyn Monroe. They inspire him to return to his original artistic passions. Actual quotes from James, Janis, Frida and Marilyn are intertwined into the dialogue to formulate this beautiful story.

Filmed on location in Paris, France. The bars and cafe’s of 1930’s Paris were full of artist’s making their mark on society. The magical allure of the city attracted the likes of Pablo Picasso, Salvador Dali, Joan Miro and many more. Absinthe fuelled the creativity of these wonderful visionaries. The Surrealist parlour game known as Cadaver Exquis or Exquisite Corpse was a popular pastime with this crowd. One would draw a word or body part and pass it to the next player until a complete story or work of art was achieved. It is within this incredible time period that we find the inspiration for our story.

So let’s have a chat with the man himself, Larry Cech.

LLI: Tell us about your new short film Absinthe and working with French legends Brigitte Fossey and Marie-Christine Barrault.

LLI: What are some of your most memorable experiences in Cannes?

LC: Cannes will always have a special place in my heart. I started my acting career again after a 20 year absence from Hollywood. When I first stepped foot in the town I knew I was home. The creative energy that exists during the famed film festival does not exist anywhere else in the world. It’s the one place that you can meet the composers of your next movie while having a drink at the Turkish Pavillion overlooking the Mediterranean (we did). See John Travolta and Uma Thurman screen Pulp Fiction on the beach with enough security for a head of state, and then watch the sun come up after a long night of celebrating with people you just met a few hours before in a seafront Villa in Madelieu. Anything is possible!

I was fortunate this year to have the full red-carpet experience with Brigitte to see the premier of the French film  L’ Amant Double. When we arrived and got out of the car, hundreds of screening fans lined the streets. We were then escorted to the top of the red carpet where they then announced each of us and Absinthe to the international press.  The flashbulbs from the endless sea of photographers and paparazzi were almost blinding. It was an amazing moment.

Larry and James in Cannes

Cannes also has it’s beautifully quiet places. Ille Saint Honorat and Lerins Abbey are just 15 minutes off the coast via ferry but are a world apart. There is a sprawling vineyard and a lovely monastery to tap into your spiritual side. It’s a perfect place to give some thanks and get a few moments away from the hustle and bustle of the festival. It’s very special.

LLI: So you are an actor and producer. How do the two fit together?

LC: I realized when I started that the two are very synergistic. I still audition for various roles but my partner Raul Torres, from the movie Wonderstruck with Julianne Moore (Official Selection Cannes 2017) and I agree that when we find a good script, package it correctly with the perfect actors and director, that we can successfully produce projects that really matter to us. This year in Cannes there were no less than four actor/producers that were on the jury including Will Smith and Jessica Chastain. It was very inspiring.

LLI: Who are some of the people that you would love to work with?

LC: The list is long. Directors I would love to work with are Wes Anderson (Grand Budapest Hotel). I think his characters are so different and memorable and the way he envisions his stories are just wonderful. If Billy Wilder was still alive I would probably work with him for free. As for actors, Uma Thurman, Sophia Loren, Gong Li, Tilda Swinton, Danial Craig,  Robert Duvall, Gene Hackman. The list is endless.

LLI: What’s up next for you?

LC: We have several features in development including two comedies and a very special drama about the Mexican/American border which is told through the eyes of two border guards on either side of the border. It’s timely and has an important message. I’m also in talks for several future acting roles both in the US and France. It’s an exciting time.