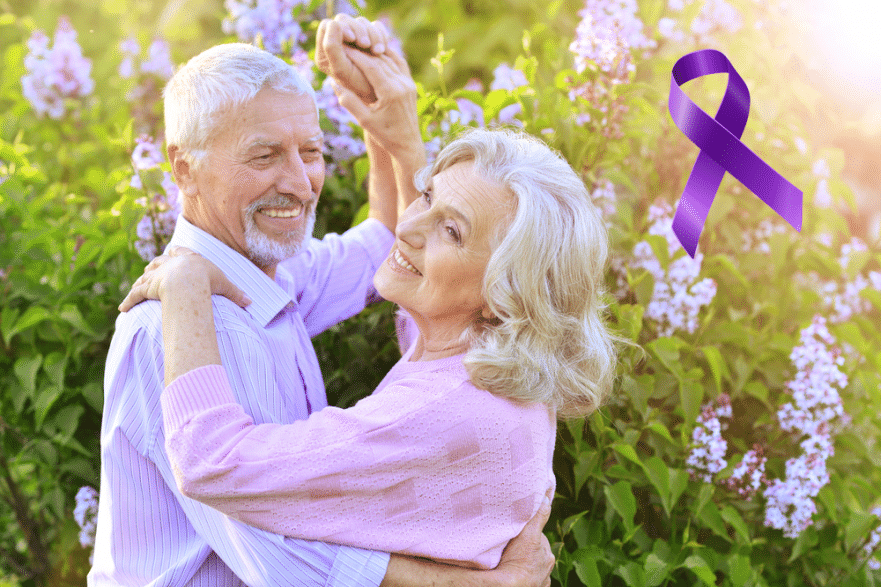 Britain is in the grip of an Alzheimer’s pandemic which shows no signs of abating. As healthcare becomes ever more sophisticated we are all living longer, but at a terrible price. Currently up to 50 million people worldwide and over 850,000 people within the UK are living with dementia, with 42,000 sufferers being under 65 years old! It is the leading cause of disability and dependency among the elderly and affects memory, thinking, behaviour and emotion.  There is no cure.

Passion for this cause goes right to the very top of the famous Arthur Murray Dance empire, as Vice-President Wayne A. Smith confirms: “Arthur Murray has a long history of supporting Alzheimer’s organisations and our studios across the world including three in London actively support the cause.

“Dancing is a proven rehabilitation approach to help reduce the symptoms of dementia and to this end, we have invited Gary Edwards to raise awareness of the cause.”

Gary, winner of over 30 international dancing titles was the hot favourite to replace Len Goodman on Strictly Come Dancing in 2017. A presenter on Dancing with the Stars in the US, since retiring from competition, the 6′ 4” Ballroom Giant has gone on become a world class judge and has launched #GetBritainDancing to promote the social and lifestyle, physical and mental health benefits of dance.

Gary explains: “I have lost friends to Alzheimer’s and it has been heart-breaking to see them fade away. I want to make people aware of the importance of staying active and vital whilst also demonstrating how much pleasure dance can bring sufferers of this cruel condition.

“Dancing is the number one activity to enhance brain health – some may say it’s even better than sudoku and crossword puzzles. It’s physical, creative, social, and gives your brain an all-round workout.”

Alongside Gary will be Shaun Mcenery, who has a long-established reputation in the world of professional dance. Shaun was one of the Pro Dancers on Dancing with the Stars in the Middle East in 2014 and specialises in the Argentine Tango. Shaun is one of 4 Arthur Murray Dance Troop members that will be coming along on the day to enjoy a day with the residents of Sunrise Care Home.

Another advocate of the cause who will be coming along is Love island’s all-singing, all-dancing bombshell Savanna Darnell. Savanna is passionate about promoting dance as a brilliant exercise for the mind and body, and raising awareness of this devastating disease which affects 50 million people worldwide.

Jackie Pool, Director of Memory Care, Sunrise Senior Living UK & Gracewell Healthcare, is an award-winning dementia innovator, drawing upon her 30 years’ specialist experience. She is currently developing a sector-leading memory care strategy for Sunrise and Gracewell through the innovative concept of ‘Rementia’, focused on reversing the symptoms of early-onset dementia. Jackie comments: “There will be over 1 million people in the UK with dementia by 2025. Social engagement is excellent for combating loneliness, reducing low mood and stimulating cognitive skills.

“To enhance this simple but effective approach with a physical activity such as dancing, multiplies the benefits. To this end, Sunrise Senior Living UK & Gracewell Healthcare include a rich and varied programme of activities for residents including dance, promoting social stimulation and confidence building.”

Wayne A. Smith from Arthur Murray Dance Studios adds: “I understand that every three seconds someone in the world develops dementia. However, thanks to Alzheimer associations around the world, awareness of dementia is improving.

These organisations provide support to millions of people and continue to advocate for improving the quality of life for those living with dementia and their care partners.”

Alzheimer Disease International (ADI) relies on donations in order to strengthen Alzheimer associations worldwide and raise awareness about the global impact of dementia. To donate go to Twitter, #WorldAlzMonth and #WAM2018.”

The Arthur Murray Dance experience, headed up by Gary Edwards, will be performed at Sunrise Senior Living at Elstree at 2.30pm on Thursday 20th September as a prelude to World Alzheimer’s Day on Friday 21st September.