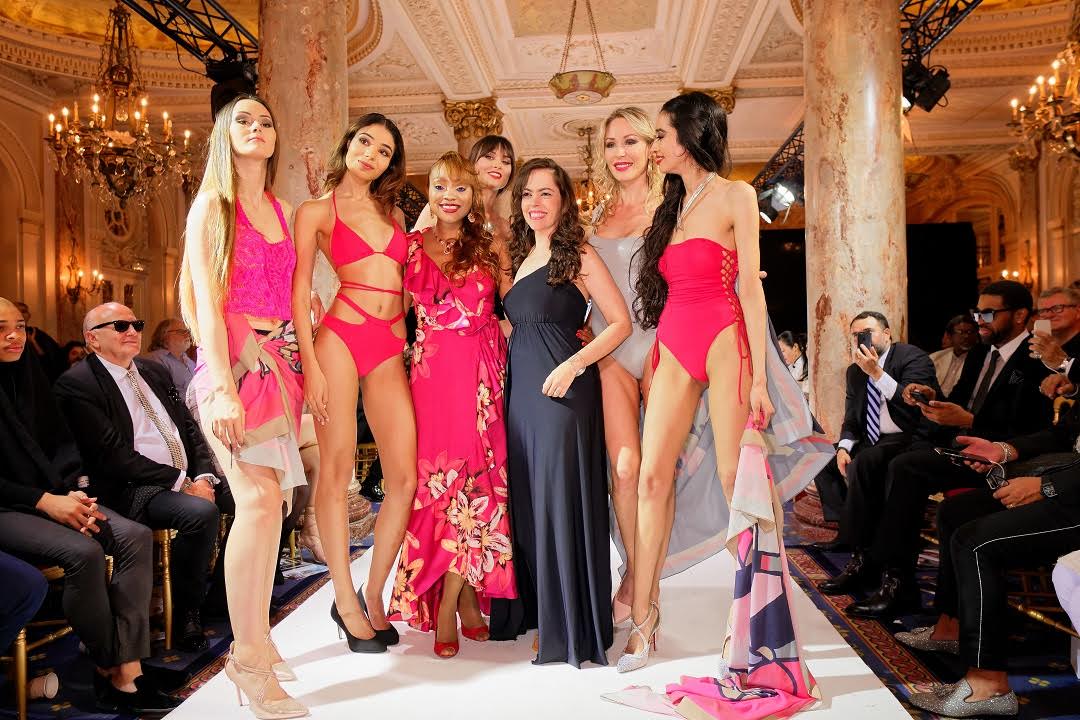 Cannes came alive once again for the 72nd edition of the Cannes Film Festival from 14th to 25th May. This year was an exciting one for women, female roles in film direction and on the jury have seen a tremendous increase at the festival. In light of this, ironic or not, the red carpets saw a general fashion trend of movement and fluidity. From mesh ruffles from shoulder to heel, feathers as worn by Elsa Hosk at the Sibyl premiere or sheer silk angel wings such as model Kimberley Garner wore at The Traitor’s premiere.

Here are a few highlights from this year’s festival:

On Thursday 16th May, Cinémoi held their annual gala supporting Stars Uniting For Good at the Members Club on Plage 45. The soirée was hosted by Cinémoi’s President Daphna Edwards Ziman and Vincent de Paul.

This year’s edition of the annual benefit gala began with a red carpet press shoot of the attending stars. Actress Beverly Todd was the first to enter the red carpet wearing a complimenting leopard print dress. Model Victoria Silvstedt was also present at the evening and turned heads in a pure white with silver metallic mosaic detailing on the hem and cuffs, paired with a pastel pink fringe clutch bag. Actress Radha Mitchell was certainly the best dressed of the evening, wearing an upcycled burgundy jumpsuit with floral detail on the shoulder. Actress Emily Shah and Actress Mafalda were also present at the event.

1. Ashlee Simpson and Evan Ross at CinéMoi Stars for Good Gala at The Members Club

High fashion brand Danaméwas created by Romanian designer Dana Stinea Messika. Dana’s designs are simple and made from silk and cotton but her eye for detail and excellent craftwork turns simple into statement. It is the addition of feather fringes and hand embroidery that sets Danaméapart and echoes back to her experiences in Asia and the Middle East.

Another fantastic designer who showcased on the evening is Atelier Mimii. Designer Marta Rios is a 23-year-old born in Zurich, Switzerland but raised in small village near Madrid, Spain. Her designs are a display of avant-garde art and invokes the famous quote by Oscar Wilde, “Art is the most intense mode of individualism that the world has known.” Expression oozes from Mimii’s style, with colour patchworks each design seem to tell its own story. Atelier Mimii is a sustainable fashion brand, Marta recycles each cut off from her designs and reuses them for another design.

On Sunday 19th May, Raindance Filmmakers held their Villa Party at Villa Joli in Cannes. Raindance and BIFA founder Elliot Grove and Raindance producer David Martinez hosted the party in association with Magnificent Films and Dragon Lady Productions. It was an evening celebrating independent filmmakers both renowned and up-and-coming. An outstanding night, acclaimed for being the best night in Cannes by many, as announced by host Elliot Grove on his Facebook page.

The event was convivial and exciting. The bars offered Kopzo Vodkafrom their promotional stand looking out over the pool. A DJ played on the terrace while models floated about the villa in exquisite dresses. The most striking dress of the evening was a full white sheer bodycon dress with black floral embroidered detailing.

Over the course of the evening, Rohit Karn Batra (director at Level Street Productions) commented about his unconventional method of casting actors, explaining that “If I connect with an individual [on a spiritual level], I know they are the one for the role. It isn’t about a perfect audition; it is whether or not I feel that connection”. During the festival, he was selling his newly-produced gangster movie and could not comment further on this. Other attendees at the villa included: Actor and Director Sean Cronin, Actor Florian Fischer, Actor Douglas Utting, Executive Producer Elliott Ryan, Director Julian Richards, Actor Debbie Tarrier, Filmmaker and Screenwriter Neil Monaghan, Actor Jonathan Hansler, Film Producer Lorenzo Lello Carvelli.

Despite the rain, the party went on and it was an excellent evening amongst an inspiring group of individuals.

3. OR ADDICT Champagne, one of the key partners of Tiffany’s Red Carpet Week Cannes 2019

The Show opened with Anne Kervall Couture of Paris. A measure to fit fashion label based on Rue de La Paix in Paris. Kervall’s collection began with a gesture to Paris as the model lifted up the Eiffel tower that she wore perched upon her head, fixed to a bowler hat. The matching attire included an abstract blazer and skirt in blue and white. The collection spanned from fairytale bridal dresses with lace embroidery through fashionista business woman, to stunning evening gowns of lime green with crystal embellishments and bold red with floral ruffles.

Next on the runway was The 1972 Couture Jewellery by Niharika Momtaz from Dubai. Her show paired simple yet elegant outfits in various delicate colours to accentuate the brand’s powerful jewellery. Drop earrings, gold headpieces and heavy, tiered necklaces adorned the runway.

Sophia Be Couture from Algeria débuted her first collection at the show. The catwalk was a gradient of bold red to pastel pinks and purples. Sophia put on a beautiful display of lace, fringe and crystal embellished designs. The first pieces of the collection evoked a prom dress style with tulle skirts, ruffle busts and corset backs. The following designs turned more seductive with sheer burgundy dresses with crystal flower adornments. Finally, Sophia Be Couture’s début show ended with six power red attires. The Algerian influence shone through in this collection with some interesting floaty capes threaded with yellow gold and sapphire blue.